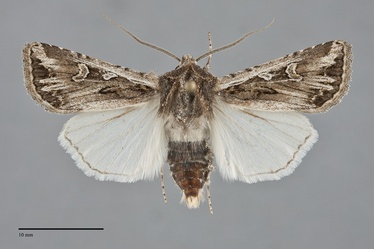 Euxoa brevipennis is a small to medium-sized, sexually-dimorphic Euxoa (FW length 13–17 mm) that flies in dry forest and steppe during the fall. Males are streaky pale gray-tan and gray with a pale costa and a white hindwing, whereas females have darker forewings lacking a pale costa and a gray hindwing with a white fringe. Males typically have a pale ochre-gray to gray-tan ground color. The base and central median area are darker gray to gray-brown, extending distally along the dark veins but sparing a pale streak in the fold. The distal cubital vein is usually light gray. The cell is blackish gray or brown, and the costa is cream or light gray to the postmedial line. The terminal area is dark gray. A diffuse black basal dash is present. Less common forms have a more uniform gray-tan forewing with a brown cell and only slightly paler costa, or are more mottled tan with light gray along the costa and gray in the terminal area. Females are dimorphic—roughly half are similar to the most common form of the male but grayer, with silver-white costa; those of the other form are powdery light brown-gray with a darker gray terminal area. The lines are dark gray, variable present, weak and largely obsolete in forms with a pale costa and complete in powdery gray females. Typical males have twin dark spots on the costa at the line origins, a laterally convex segment of the antemedial line at the base of the claviform spot, and a toothed postmedial line evident as the demarcation between the darker median area and the lighter subterminal area. In the lighter females the basal and antemedial lines are thick on the costa and lighter gray elsewhere, filled with the ground color, slightly irregular and weakly angled toward the outer margin. The median line is a dark spot on the costa. The postmedial line is toothed, drawn toward the base on the costa, bent basad below the costa, and nearly straight toward the base at a 45°angle. The subterminal line is pale ochre, tan, or light gray depending on the color of the moth, irregular with a blunt W-mark on the mid-wing. It is preceded by dark gray shading on the costa and posterior forewing and a series of long, black chevrons between the veins on the mid-forewing. The terminal line is dark, broken at the veins. The fringe is variable, most often light gray to luteous gray with longitudinal stripes. The orbicular and reniform spots are outlined in outer gray to black and inner whitish gray to pale ochre. The orbicular spot is oval or an irregular elongate bar, sometimes entirely pale but usually with a darker gray center. The reniform spot is moderately large, kidney-shaped, filled similarly but with more dark gray or brown-gray centrally. The claviform spot is moderate-sized, narrow, thin gray to nearly solid black. The male hindwing and fringe are white, with a poorly demarcated thin band of dark gray near the outer margin, dark gray distal veins and terminal line, and a small weak discal spot. Females have a gray hindwing with a pale gray base, with more extensive dark veins, more prominent discal spot, and white fringe. The head and thorax are gray-tan. Specimens with a pale costa have similar color at the base of the collar, separated from the tan edge by a black transverse line. The male antenna is bipectinate and appears relatively thick for the genus, tapering over the distal third. Euxoa brevipennis is placed in the subgenus Euxoa.

This species is widely distributed in dry rangelands and woodlands throughout much of western North America.  In the Pacific Northwest, it is common in juniper woodlands at middle elevations and on dry, open sagebrush steppe at low elevations east of the Cascades.  It is particularly common on more disturbed, over-grazed rangelands during drought years, and may be relatively rare during wet years.  It is also more common on sagebrush steppe that has been burned in wildfires.  In general, this species appears to benefit from disturbance, either wildfires or over-grazing by domestic livestock.

Euxoa brevipennis is found in dry forest and steppe habitats in the dry interior regions of the Pacific Northwest as far north as south-central British Columbia.

This species is a soil-surface feeding cutworm that feeds on various herbaceous vegetation, including such families as the Brassicaceae, Fabaceae, and Asteraceae.

Adults fly in the fall, as early as late August. Most records in the Northwest are from September. They are nocturnal and come to lights.