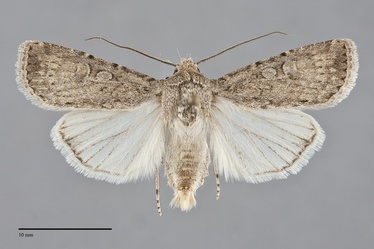 Euxoa satiens is a small to medium-sized, fall-flying Euxoa (FW length 14–17 mm) that flies in sage steppe and dry open forest. It has powdery, light tan-gray forewings with an oval orbicular spot with or without a small ocellus, a strongly toothed postmedial line, and gray veins on the distal forewing. The forewing is rather bluntly truncated. The ground color varies from cream to medium-dark tan-gray but is almost always heavily peppered with dark scales to give a sandy appearance. The distal forewing is slightly darker gray, as is the cell between the spots in a few specimens. The basal, antemedial, and postmedial lines are gray, double with components of unequal strength, very variable in prominence from limited to spots on the costa to dark across the forewing, The basal line is close to the base, inconspicuous. The antemedial line is slightly irregular and angled slightly toward the outer margin. The median line is usually absent but occasionally a faint to moderately prominent gray line bent through the lower reniform spot. Only the inner component of the postmedial line is present in most specimens, strongly toothed on the veins with thin dark lines on the veins near the tips of the teeth which often persist even when the line is very faint, drawn basad on the costa, smoothly and widely excurved around the reniform spot, and angle 45° toward the base near the posterior margin. The subterminal line is a series of diffuse tan or yellowish spots, undulating with a slight step-off below the apex and a slight notch basad at vein M2. A series of black spots or an undulating line forms the terminal line. The fringe matches the ground color of the wing, sometimes with a checkered base. The orbicular and reniform spots are partially outlined in black, occasionally in a pale shade of the ground color without dark component, are moderate-sized, and are closely-positioned. The orbicular spot is a perfect ellipse with the long axis parallel to the cell, often incomplete posteriorly, filled with the ground color and often with a central light gray line. The reniform spot has a black inner outline and is often indistinct elsewhere, is filled with the ground color peripherally and darker gray centrally. The claviform spot is often absent, small and gray when present. The male hindwing is pure white with variable dark gray on the distal veins, a thin powdery band of brown-gray near the outer margin, and usually a thin terminal line; that of the female is pale gray with more extensive dark gray suffusion on the outer two-thirds, with dark gray veins and terminal line, a faint thin discal spot. The hindwing fringe is white in both sexes. The thorax is dusty gray-tan, matching the forewing with a powdery dark gray line across the collar in some specimens. A frontal tubercle is present. The male antenna is biserrate.

The elliptical orbicular spot positioned near the reniform spot makes Euxoa satiens is one of the most easily recognizable fall-flying desert Euxoa species despite its drab color. Other useful marks include the even powdery forewing, strongly dentate postmedial line, especially when followed by dark lines on the veins, and the dark veins on the hindwing of the female. It is also relatively large.

This species is quite variable in color across its greater distribution. Specimens exist which are nearly white, dark gray, or light red-brown. These extremes are very rare or absent from the Northwest.

The type locality of Agrotis satiens Smith is British Columbia.

This species is widely distributed throughout much of western North America in arid rangeland or dry forest habitats.  In the Pacific Northwest, it is common in dry, open lodgepole pine forests on volcanic ash and pumice soils at middle elevations along the east slope of the Oregon Cascades.  It is also common to abundant on lowland sagebrush steppe east of the Cascades, particularly during drought years.  It may expand into epidemic outbreaks on disturbed, over-grazed rangelands with high densities of weedy, annual mustards and other herbs.  It is also more common on sagebrush steppe that has been burned over in wildfires.  This species appears to benefit from disturbance, either over-grazing by domestic livestock or from fires.

Euxoa satiens is found in the interior of our region as far north as southern British Columbia. It is found in western Montana and southern Idaho, but has not been collected in central or northern Idaho.

No information is presently available regarding larval foodplants of this species, but it is probably a soil-surface feeding cutworm that feeds on herbaceous vegetation based on related species.  Massive epidemic outbreaks of this species occur on heavily disturbed rangelands infested with annual, weedy mustards (Brassicaceae), and this vegetation may provide an important food source for the larvae.

Adults of this species predominantly in the fall, usually from late August through September. A few records are from earlier at the end of July and beginning of August, but this is unusual. It is nocturnal and comes to lights.