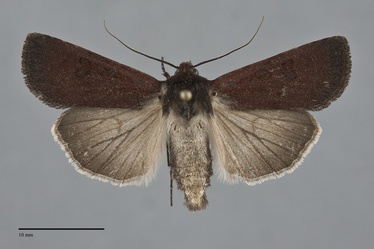 Euxoa perpolita is a medium-sized Euxoa (FW length 14–17 mm) that flies in dry conifer forests during late summer. Its forewing is very smooth, slightly shiny, and dark red-brown or brownish black with black outlines of the orbicular and reniform spots. The forewing is relatively short and broad with a slightly pointed apex and convex outer margin. The color is rich and even, waxy, and dark brick-red with darker brown-gray outer margin or completely brown-black. The orbicular and reniform spots are outlined in black and filled with the ground color. The orbicular spot is small and round and the reniform sot is moderate-sized and kidney-shaped. All other markings are lacking. The hindwing is tan-gray with a dark gray margin, dark veins, discal spot, and terminal line. The hindwing fringe is two-toned gray. The thorax usually matches the forewing color, although some reddish individuals have dark thoraxes. The frons bears a flat-topped tubercle. The male antenna is biserrate. Euxoa perpolita is placed in the subgenus Orosagrotis. This subgenus is characterized by the orientation of the male vesica which extends to the left from the aedeagus and the position of the ductus seminalis which joins the right side of the corpus bursae.

This species can be recognized by its waxy dark red or brown-black forewing with small black spots. Other dark red Euxoa species, such as Euxoa excogita, and black ones such as Euxoa punctigera, have light scales in the forewing spots and usually some other pattern elements. Abagrotis brunneipennis can have a similar satiny red-brown color and flies with E. perpolita at several locations. It lacks the black-outlined spots and usually has more prominent transverse lines than E. perpolita.

The type locality of the synonym Carneades exculta Smith is British Columbia.

This species is widely distributed across Canada in a variety of habitats.  In northeastern North America and on the Great Plains, it is typically found in dry sandy habitats.  However, in the northern Rocky Mountains and north Cascades, it occupies spruce-fir and pine forests. It is relatively sporadic and rarely collected in the Pacific Northwest.

The range of this species extends across Canada to the East Coast where it is found from the island of Newfoundland to Massachusetts. The western range extends south to the western portions of Montana and South Dakota outside of our region.

Euxoa perpolita has been collected from early August to early September in the Northwest. It is nocturnal and comes to lights.