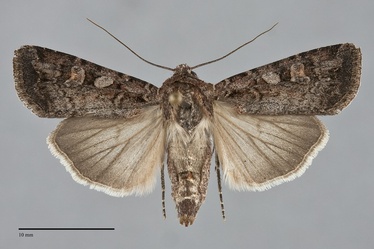 Euxoa tessellata, the Tessellate Dart Moth, also known as the Striped Cutworm, is a very common, small to medium-sized Euxoa (FW length 13–17 mm) that is found east of the Coast and Cascade Ranges and flies during the summer. It has a variable mottled blue-gray, blackish red-brown, or dark gray forewing with a slanted ovoid orbicular spot and broad reniform spot often lined with light ochre scales. The most common form in our region is mottled bluish or silvery gray, sometimes darker charcoal or brown-gray. Subtle yellow or red suffusion is sometimes present in the posterior median and subterminal areas. The terminal area is darker gray. Darker gray to black often fills the cell. A black dash is variably present, thickest in specimens with a black cell. Less common forms are more even medium to dark gray, or dark brown-gray. Dark brown forms with black in the cell are more common east of the Continental Divide. The basal and antemedial lines are dark gray or black, double filled with the ground color or slightly lighter gray. The basal line is evident on the costa and cubital vein. The antemedial line forms two diffuse spots on the costa and is irregular below the cubital vein, angled slightly toward the outer margin. The median line is gray, relatively faint. The postmedial line is gray, usually double with a darker weakly scalloped inner and faint even outer components, sometimes lacking the outer component, even in strength across the forewing, pulled toward the base on the costa, bent toward the base below the costa or bluntly excurved around the reniform spot and then angled strongly toward the base. The subterminal line is pale gray, often slightly yellow, thin, slightly irregular with an offset below the apex and a moderate "W" mark on the mid-forewing. It is preceded by a dark gray spot on the costa and a variable gray shade or series of small black wedges between the veins on the mid-wing. The terminal line is black, thin or a series of black triangles. The fringe is medium to dark gray, weakly barred. The orbicular and reniform spots are outlined partially in gray or black outer and variable light gray to ochre inner lines. The orbicular spot is variable in shape and size, typically an asymmetric oval or rhombus, sometimes circular, variably filled with pale gray or gray with an ocellus of the ground color. The reniform spot is broadly kidney-shaped, moderate-sized, lined with light gray, pale ochre, or light orange scales and filled with the ground color. The claviform spot is black, small. The hindwing is light gray, barely darker at the margin, with faint gray discal spot, veins, submarginal shade, and terminal line. The hindwing fringe is white with a gray base. The head and thorax are match the forewing color, often with a darker gray or brown base on the collar separated from the edge by a black transverse line. Males often have a bright orange or yellow patch at the attachment of the forewing. A frontal tubercle is present. The male antenna is biserrate. Euxoa tessellata is placed in the subgenus Euxoa.

This variable species is very commonly confused with other Euxoa species but can often be recognized if it is kept in mind for any confusing Euxoa collected during the summer. It can usually be recognized by combination of a mottled gray, dark gray, or brown-gray forewing, asymmetrical pale gray-filled orbicular spot, wide light gray or ochre-lined reniform spot, and light gray hindwing. Specimens with a red flush on the forewing or orange in the renform spot are most distinctive. The identity of the males can often be confirmed by detecting the orange patch at the base of the wing, and females can be confirmed by examining the blunt-tipped ovipositor lobes under high magnification. The most similar species is Euxoa satis which flies at the same time and is dark gray. The orbicular spot of this species tends to be perfectly elliptical, but the species are very similar superficially otherwise. Euxoa plagigera also flies at the same time. It lacks subtle warm colors and has a long, bar-like orbicular spot, unlike E. tessellata. Females of Euxoa adumbrata, a much less common moth that flies north of central Washington, resemble dark brown-gray forms of E. tessellata. It differs in having more yellow in the forewing spots, usually with reduced dark markings relative to E. tessellata. Euxoa aberrans is more powdery brown than E. tessellata, usually with a rounder and more sharply-defined orbicular spot. Euxoa cryptica is a rarely collected moth that flies in conifer forests along the southeast Cascade Range in Oregon. It is quite similar to a dark gray E. tessellata but is slightly darker and less mottled. Females are best identified by examining the papillae anales, and males are best assessed by using the orange spot character of the wing base described above. A sample of the large number of moths that can be confused with E. tessellata are depicted above.

This species is widely distributed in forests and grasslands across North America.  In the Pacific Northwest, it is most common to abundant in a variety of dry habitats, most commonly at low to middle elevations but ranging up to timberline. It flies in Douglas fir and ponderosa pine forests and juniper woodlands east of the Cascades, but also occupies disturbed agricultural and urban habitats.  It is also common on sagebrush steppe during wet years, but becomes rare and sporadic in this habitat during droughts.  West of the Cascades, it occurs rarely in coastal rainforests, oak woodlands, and mixed hardwood-conifer forests.

Euxoa tessellata is found throughout most of the Pacific Northwest east of the crests of the Coast and Cascade Ranges. It occurs as far north as south-central British Columbia. It is very common in eastern Washington, including in the Columbia Basin. It also occurs throughout eastern Oregon, in central and southern Idaho, and in western Montana. It is limited to western Oregon west of the Cascades.

This is one of the most widely distributed Euxoa species in North America. It has been found from Alaska to Newfoundland in the north, and ranges south to North Carolina, Kansas, New Mexico, Arizona, and southern California. It is only absent from the southern Great Plains, the deep South, and the Arctic.

Euxoa tessellata flies during the summer, a fact that helps separate it from similar fall flying Euxoa species. Records in our region extend from early June to late August. It is nocturnal and comes to lights.

This species has caused major damage to agricultural crops in eastern North America, and during epidemic outbreaks, may damage fruit trees in orchards.  In the Pacific Northwest, it is a minor pest in herbaceous crops such as peppermint and alfalfa.