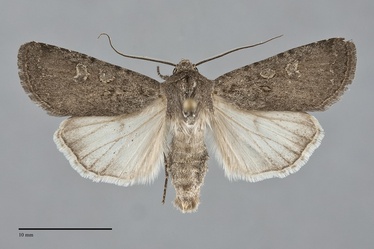 True to its species name ("cana" means gray), Euxoa cana is a powdery gray, small to medium-sized Euxoa (FW length 14–17 mm) that flies in dry forest and steppe in early fall. It has light yellow scales lining the forewing spots, a small black claviform spot, and whitish hindwings with dark veins and margin (darker in females). The forewings are nearly uniform, slightly darker gray near the margin. Some specimens are slightly streaky on the outer forewing due to dark veins. The basal line is barely evident near the costa. The antemedial and postmedial lines are variable, extremely faint to black. When visible, the antemedial line is slightly irregular and slanted toward the outer margin. The postmedial line is mildly toothed on the veins, bent 90° lateral to the reniform spot and usually touching both ends of the spot, slightly concave below the spot. The subterminal line is absent or a series of ill-defined small luteous spots. It is preceded by a barely darker shade near the costa. The terminal line is dark, thin or broken into spots between the veins. The fringe is concolorous with the terminal area. The orbicular and reniform spots are partially outlined in dark gray to black, with powdery lining of pale luteous scales and filling of the ground color. The orbicular spot is often faint and sometimes absent, oval. The reniform spot is kidney-shaped, variable in prominence. The claviform spot is black, absent or small. The hindwing is pale gray, slightly darker in females, with darker gray near the outer margin, prominent dark veins, and thin discal spot and terminal line. The hindwing fringe is white, sometimes with patchy gray at the base. The head and thorax are gray without dark markings. A frontal tubercle is present. The male antenna is biserrate. Euxoa cana is a member of the large subgenus Euxoa.

This moth is one of the most plainly marked of the fall-flying steppe Euxoa species. It can usually be recognized by the combination of even gray color, absent or variable simple lines, spots with dark outlines and scattered peripheral pale scales, and pale hindwings with dark veins. It is most often confused with gray females of Euxoa olivia, but this species has a more mottled pattern with faint but complete pattern of lines and spots. Euxoa cana can also be confused with Euxoa satiens, a species that has even more prominent dark hindwing veins. It has a larger oval orbicular spot that is rimmed in dark, as well as a pattern of dark lines that includes a strongly toothed postmedial line. Euxoa cana is closely related to Euxoa punctigera, a similar but much darker species that usually flies in more forested habitats, but is easily distinguished from it by the much lighter forewing color.

Euxoa cana flies in dry sagebrush steppe and in juniper woodlands at low to middle elevations. It is sporadic and uncommon in most of the Pacific Northwest, although it is locally common in the Columbia Basin of central Washington.

The range of E. cana is mostly limited to the Northwest and adjacent Great Basin. It extends south to central Nevada and north-central Utah.

Euxoa cana is found in late summer and early fall, flying slightly earlier than most of the late-season steppe Euxoa species. Most specimens have been collected during the months of August and September.  It is nocturnal and comes to lights.