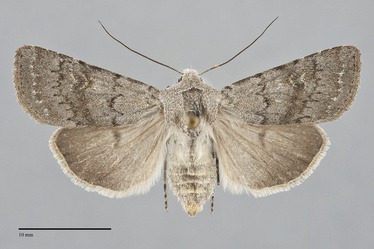 Euxoa quebecensis is a powdery gray medium-sized Euxoa (FW length 15–17 mm) that occurs in montane forest in the Pacific Northwest. It has inconspicuous, dark transverse lines and spots, and usually a pale, yellowish subterminal line. The forewing is slightly powdery medium-dark gray, and even, except slightly darker in the terminal area and distal subterminal area. The basal and antemedial lines are dark gray, double with components of unequal strength, filled with the ground color, slightly irregular and oriented nearly perpendicular to the forewing. The median line is slightly darker than the terminal area, diffuse, and weakly excurved through the medial cell. The postmedial line is single with long teeth on the veins, strongly pulled toward the base on the costa, nearly transversely-oriented opposite the reniform spot, and slightly concave and angled 45° toward the base below the cell. The subterminal line is pale yellowish, variable from very faint to a series of diffuse pale spots, slightly irregular. It is preceded by a gray shade that is similar to the terminal area. The terminal line is thin, dark. The fringe is the color of the terminal area. The orbicular spot is oval, outlined in pale gray but is often incomplete or absent, is filled with the ground color. The reniform spot is kidney-shaped, partially outlined in dark gray and powdery yellowish scales and filled with dark gray. The claviform spot is absent. The hindwing is tan-gray, slightly darker gray toward the margin, with a dark discal spot and terminal line. The hindwing fringe is white with an ochre and gray two-toned base. The head and thorax match the forewing color. This species lacks a frontal tubercle. The male antenna is weakly bipectinate with long fasciculations. Euxoa quebecensis is a member of the subgenus Pleonectopoda, characterized by a coil or twist of the male vesica near its base. The is only evident in specimens in which the vesica is everted and inflated during dissection.

This species can be recognized by its powdery blue-gray color, simple pattern of dark lines and filling of the reniform spot, weak or absent orbicular spot, and pale subterminal line. It can be confused with several other gray Euxoa species that fly with it in the mountains. All of the other species are smoother or browner and have more conspicuous spots. Structurally, E. quebecensis differs from all of them in lacking a raised frontal tubercle. The only other Northwest Euxoa without a tubercle is Euxoa aurulenta, an entirely different-appearing moth that lives on dunes.

This species is widely distributed in boreal spruce-fir forests across Canada, extending southward through the Rocky Mountain region.  In the Pacific Northwest, it is usually found at moderate to high elevations in subalpine spruce-fir and quaking aspen forests. This moth was common in the pumice fields of the Mt. St. Helens blast zone.

Euxoa quebecensis occurs in British Columbia and the Cascade Range of Washington. The range is stated as extending to west-central Oregon in Lafontaine (1987).

Lafontaine (1987) describes the range of this species as disjunct, with eastern and western loci. It occurs from the island of Newfoundland and Maine to western Ontario in the East. The western distribution extends north to Yukon Territory from the Pacific Northwest. It also occurs in the Rocky Mountains of Alberta and Colorado.

No information is presently available regarding larval foodplants of this species, but it is probably a soil-surface feeding cutworm that feeds on herbaceous vegetation based on related species. This species experienced an outbreak in the pumice plain following the eruption of Mt. St. Helens in southwestern Washington where it was reported as feeding on lupine (Lupinus spp.) in the Fabaceae (John Bishop, personal communication).

This species flies in the summer from late June to mid-August. It is nocturnal and comes to lights.