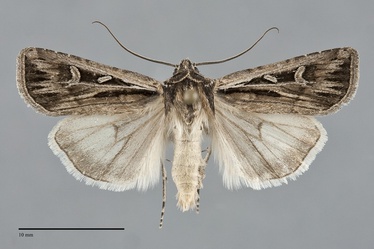 Euxoa oblongistigma is a small Euxoa (FW 12–14 mm) that flies in steppe during late summer. It has streaky gray-brown forewings with a black cell, black basal dash that appears to continue to the mid-forewing, a black cell, bar-like pale-filled orbicular spot, and pale hindwing with a gray marginal band. The forewing ground color is light tan-gray, suffused with darker gray surrounding the cell and along the veins in the posterior median and subterminal areas. The apex, distal subterminal area opposite the cell, and long teeth of a W-mark on M3 and CuA1 are light gray. The costa is also smooth gray, whitish near the base, darkening in the subterminal area. The cell is filled with dark brown-gray. A thick black basal dash extends to the base of the claviform which appear to be fused into one longer mark. The cubital vein is light gray to the postmedial line, while the other veins are black. The transverse lines are inconspicuous. Faint gray spots mark the antemedial and postmedial lines on the costa. The antemedial line forms a short black mark on the mid-forewing at the base of the claviform spot. The postmedial line is a scalloped transition between the darker median area to the gray subterminal area near the end of the cell and is absent from the posterior forewing. The subterminal line is light gray thin or absent, slightly irregular with a moderate W-mark on the mid-wing. It is preceded by a dark gray shade on the costa and a series of long black wedges between the veins on the mid-wing. The terminal line is black. The fringe is gray with a tan base. The orbicular and reniform spots are outlined crisply in black and are filled nearly uniformly with light gray with slightly darker centers. The orbicular spot is bar-like, nearly horizontal, nearly solidly pale in most specimens. The reniform spot is boomerang or C-shaped, usually with a darker gray central lunule. The claviform spot is black, often solid, moderate-sized, narrow, appearing to be the continuation of the basal dash. The hindwing is light whitish gray with moderately well-defined gray marginal band on the outer third, with barely darker discal spot, veins, and terminal line. The hindwing fringe is white with a patchy light gray base. The head and antenna are gray-tan to brown, with a pale base and black line across the mid-collar. A frontal tubercle is present. The male antenna is biserrate. Euxoa oblongistigma is placed in the large subgenus Euxoa.

This species can usually be recognized by its sage steppe habitat, late summer flight period, tan-gray forewing with nearly unmarked light gray costa and similar filling of the bar-like orbicular spot, and pale hindwing with gray marginal band. It is most similar to Euxoa olivalis, although the two rarely fly together because low-elevation populations of E. olivalis fly earlier in the summer before E. oblongistigma. Euxoa oblongistigma is less brown than E. olivalis with less streaky gray on the costa and near the cell, its orbicular spot is more uniformly gray without significant darker filling, the basal dash and claviform spot are more prominent, and the hindwing is lighter, less brownish, and appears banded. The males of these species differ structurally which can be observed in specimens from which the scales have been removed from the tip of the abdomen by brushing. The saccular extensions of E. oblongistigma is relatively short and ends slightly proximal to or near the anal angle of the cucullus, while that of E. olivalis is long and appears to curve around the "heel" of the cucullus. Euxoa quadridentata, another fall-flying species from sagebrush habitats resembles E. oblongistigma but can be told from it by yellow on the forewing and thorax and by two pale teeth near the outer margin below the apex in addition to long teeth at the "W" mark, features lacking in E. oblongistigma.

This species is widely distributed in open dry habitats throughout much of western North America.  In the Pacific Northwest, it occurs in juniper woodlands and sagebrush steppe at middle to low elevations east of the Cascades, and is moderately common in such habitats.  Numbers of this species were greatly reduced in juniper-sagebrush habitat that was burned in a wildfire compared to adjacent non-burned habitat. This contrasts with the closely related E. olivalis that appears to benefit from fires.

Euxoa oblongistigma is found in the dry interior of the Pacific Northwest as far north as southern British Columbia. It appears to be restricted to the western portion of the Columbia Basin in Washington but is distributed more generally  in eastern Oregon. It has also been recorded for western Montana and central and southern Idaho.

The range of E. oblongistigma extends across southern Canada to Saskatchewan. Its eastern limit is relatively well-defined along an imaginary line through the western Dakotas to northern New Mexico. The southern distribution is northern New Mexico in the Rocky Mountain region, southern Utah and central Nevada in the Great Basin, and west-central California near the Pacific Coast.

Adults fly in late summer and early fall, generally later than E. olivalis in the same region and slightly earlier than most of the fall-flying steppe Euxoa species. It has been collected from late July until mid-September in the Pacific Northwest.