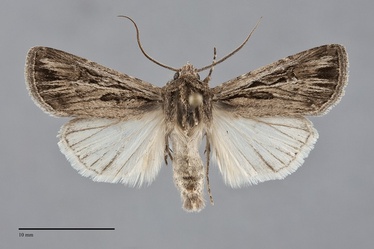 Euxoa atristrigata is a fall-flying, small to medium-sized Euxoa (FW length 14–16 mm) with light hindwings and streaky brown forewings with prominent black markings that include long, fused orbicular and reniform spots and black lines near the outer margins. The forewing ground color is even brown, slightly suffused with gray between the veins in the posterior median subterminal areas. The narrow terminal area is dark brown-gray. The cell is black, but the cell is nearly filled by the spots giving the appearance that the outlines of the spots are unusally thick. A black basal dash extends to the base of the claviform spot. The veins are dark. The transverse lines other than the subterminal lines are obsolete except at the costa. The subterminal line is evident as the jagged transition between the brown subterminal and gray terminal areas, the uneven nature of which is accentuated by very long black lines between the veins across the mid-forewing. Teeth of the subterminal area reach the outer margin opposite the cell and at the W-mark on the mid-forewing. The forewing spots are thick and black. The orbicular spot is very lone and is fused to the C-shaped reniform spots. These spots are filled with the ground color and a dark streak in the orbicular spot. The claviform is long and black, the length exaggerated by the black basal dash. The male hindwing and fringe are white with darker gray veins and terminal line; that of the female is brownish off-white with increased gray marginal suffusion, and a white fringe with a gray base. The head and thorax are brown with a black line across the mid-collar. A frontal tubercle is present. The male antenna is weakly bipectinate. Euxoa atristrigata is a member of the large subgenus Euxoa.

This species can be identified by its late summer and early fall flight period, brown color, and streaky pattern with long fused orbicular and reniform spots and long black lines near the outer margin. Other fall-flying Euxoa species with fused spots, such as E. hollemanni and E. nevada, are gray rather than brown, and lack the bold, black elements of the forewing pattern. Euxoa subandera is a brown species with fused spots, although it flies in mid-summer rather than in the fall. It is a smaller species than E. atristrigata, and has a dark hindwing. Agrotis venerabilis is another streaky fall-flying moth that resemble E. atristrigata in size and general appearance. It has a long, black claviform spot, but its spots are unfused. Females of E. atristrigata have heavily sclerotized processes on the ovipositor lobes, which are fused across midline. These can sometimes be observed in undissected specimens under moderate magnification, although the distinctive pattern of this moth rarely requires examination of structural characters for positive identification.

The type locality of Agrotis atristrigata Smith is British Columbia.

This species is widely distributed in dry woodland, rangeland, and short-grass prairie habitats.  In the Pacific Northwest, it is relatively common in juniper woodlands and other brushy habitats at middle elevations. It is also common on moist sagebrush steppe at the edge of wetlands such as marshes or riparian zones along creeks.  It is mostly absent from dry sagebrush steppe.  Euxoa atristrigata avoided a juniper woodland that had been burned off by a wildfire in central Oregon, while it was common in the adjacent unburned woodland.  Thus, this species appears to be intolerant of fire.

Euxoa atristrigata is found in the dry interiors of southern British Columbia, Washington, and Oregon, as well as in southern Idaho and western Montana. The range is restricted to the Columbia Basin in Washington but is more widespread in eastern Oregon.

The range of E. atristrigata extends east to western North Dakota and northern Montana. It occurs on the western Great Plains to eastern Wyoming, central Colorado, and northwestern New Mexico. The southern limit of its range is northern Arizona and southern California.

No information is presently available regarding larval foodplants of this species, but it is probably a soil-surface feeding cutworm that feeds on herbaceous vegetation based upon related species.  The sensitivity to wildfires suggests that it may be a foodplant specialist feeding on semi-woody plants such as buckwheats (Eriogonum spp.) in the Polygonaceae.

Adults fly during late summer and fall, usually slightly earlier than some of the latest-flying steppe Euxoa species. It has been collected as early as mid-July, with most records in our region from late August to mid-September. It is nocturnal and comes to lights.